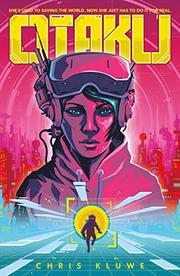 In this cyberpunk fiction debut, a massively popular online game has real-world consequences.

Ashley Akachi is a mixed-race woman who’s known as “Ashura the Terrible” to millions of fans of Infinite Game, which is watched around the world. In a near-future Florida that’s half drowned by rising sea levels, she sits inside a haptic chamber that converts her movements into gameplay in the ultraviolent competition. Former NFL player Kluwe (Beautifully Unique Sparkleponies, 2013) describes the game’s mechanics at length, at times giving the book the feel of watching someone else play a video game. (The game’s racist and misogynist online message boards also feature prominently.) Eventually, Ash uncovers a vast conspiracy involving not only Infinite Game, but also her love interest, Hamlin, who’s hiding a secret of his own. Unfortunately, there’s not enough space in this brief review to examine everything that’s obnoxious or distasteful in this novel, from its opening bullet-point infodump, lazily passed off as worldbuilding, to its eye-rolling last line. One may wonder if any women were involved in this book’s publication in any meaningful way. Only a male author could believe a woman thinks about “dicks” this often; when facing gender inequality, Ash huffs, “Must be nice to have a dick”; before castrating a would-be rapist, she scoffs, “You thought your dick made you a man? You’ll never be a man again.” Characters' attacks on Ash are all viciously gender-specific; in addition to being threatened with rape throughout, she's repeatedly called “slut,” “whore,” and “cunt.” Meanwhile, Ash herself reads like an unintentional parody of an empowered woman; she leers suggestively at a woman’s behind and then laments her small bust size, at length, before deciding “boobs are overrated.” At the book’s climax, Ash thinks that she’s “so tired of shitty men and their shitty dreams.” After reading this, readers will surely feel the same.

Irredeemable in any world, real or virtual.