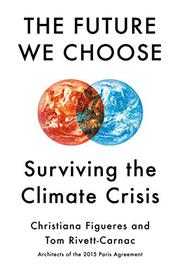 THE FUTURE WE CHOOSE

A practically minded manifesto for personal action in the face of climate change from the leaders of the negotiations at the 2015 Paris Agreement.

Figueres, a baby boomer, is a daughter of a three-time president of Costa Rica, a country that has one of the best environmental records of any in the world; Rivett-Carnac is a Gen Xer who descends from a head of the British East India Company. The difference in age and circumstance is enough for them to write, “we were born in two different geological periods.” They are united, both organizationally and intellectually, in a quest to overcome the worst of climate change—one that might be futile given that the rates of greenhouse gas emissions continue to rise. The authors challenge each individual to do what governments and corporations cannot or will not do. One plank might be paraphrased by the old labor motto “Don’t mourn, organize,” save that the authors do save room for mourning: “There is no chance of stopping the runaway warming of our planet, and no doubt we are slowly but surely heading toward human extinction.” The psychological dislocation caused by this realization could be enough to send people into basements for the rest of their lives, but the authors propose a series of concrete actions and tenets: “Let go of the old world,” they counsel, and acknowledge that some of the old ways of the past can never be recaptured again, even as nostalgia proves an enemy that “can distract us from the urgent work ahead.” Just so, they urge, “Defend the truth.” When populist and nationalist leaders seek out scapegoats, be prepared to fight back with science to replace the pseudoscience. The authors close with a timetable for personal actions that contribute to a “regenerative world,” from abjuring the consumerist politics of old right now to cutting your emissions in half by 2030.

At once depressing and inspiring: We may be doomed, but this book urges us to at least try to do something about our demise.