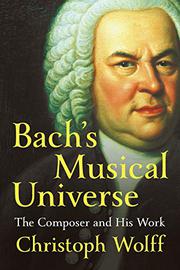 The Composer and His Work
by Christoph Wolff
BUY NOW FROM
AMAZON
BARNES & NOBLE
LOCAL BOOKSELLER
GET WEEKLY BOOK RECOMMENDATIONS:

Eminent musicologist Wolff (Adams University Professor Emeritus/Harvard Univ.; Mozart at the Gateway to His Fortune: Serving the Emperor, 1788-1791, 2012, etc.) offers an erudite companion to his biography Johann Sebastian Bach (2000), a Pulitzer Prize finalist, with a detailed examination of the development of Bach’s creative process, goals, and achievements. Because Bach left no theoretical writings, Wolff selects from the composer’s prodigious oeuvre—including keyboard workbooks, toccatas, suites, sonatas, concertos, choral works, and oratorios—to focus on elements of musical design, engagement with other repertoires and genres, reassessment of existing conventions, and innovations. Facsimile pages are excerpted from an online library of Bach manuscripts. Bach, writes the author, “competed with himself constantly,” making “judicious revisions to his own works.” His competitive attitude also led him to pay careful attention to the works of other composers, past and contemporary, as he evaluated his own compositions. Also influencing his musical evolution were the demands of his changing professional duties: town organist, court organist and chamber musician, concertmaster, and cantor and music director in Leipzig, where he also directed the Leipzig Collegium Musicum for more than 10 years. As part of his duties in Leipzig, he was required to offer about 60 cantata performances yearly; although these did not have to be his own compositions, Bach added “a considerable repertoire of his own music” to his growing sacred and secular vocal compositions. Throughout his career, Wolff notes, Bach was “a passionate instrumentalist,” acclaimed for his performances on the organ and harpsichord, and he was frequently invited to give guest concerts. His prowess on the keyboard fed directly into his “pathbreaking approaches” to harpsichord and fortepiano. The author identifies Bach’s intense interest in exploring “all facets of the art of polyphony” as singularly characteristic of the composer’s musical language. For a musically sophisticated reader familiar with Bach’s works, as well as musical terminology and technique, Wolff’s analyses have the potential of enriching the listening experience.