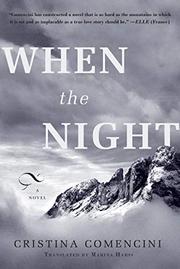 Two strangers meet in the Italian Dolomites and are equally attracted to and repelled by each other.

Accompanied by her 2-year-old son Marco, Marina takes refuge in northern Italy to sort out her relationship with her husband, which has deteriorated since the birth of their child. There she meets Manfred, a local mountain guide as elemental as the rocky peaks surrounding him. Manfred is, to put it charitably, taciturn, if not morosely uncommunicative. He quickly develops an antipathy toward Marina as being a bad mother, for in a mysterious incident she briefly leaves Marco, who falls and hurts himself. Manfred grudgingly leads Marina up to a remote mountain lodge owned by his family, and there she meets Manfred’s brothers and his sister-in-law, with whom she develops a rapport borne out of their shared roles as mothers. Despite herself, Marina starts to feel drawn to Manfred, estranged from both his wife, whom he’s brutalized, and his two children. She begins to fantasize what intimacy with Manfred would feel like and concludes it would not be for the faint of heart. Then, in an almost psychic episode, Manfred is missing when he’s expected at the lodge, and she impulsively calls the local police, who find him in a crevasse, so he now feels a reluctant obligation to Marina for saving his life. Although they come close to consummating their affair, they never act on their impulses, and Manfred tells Marina to return to her husband. Fifteen years later Marina, driven by curiosity, seeks out Manfred one more time to see what she might have missed.

A director and screenwriter as well as a novelist, Comencini is adept at creating an extraordinary portrait of psychologically scarred characters.

THE COVE
by Ron Rash
Fiction

HAND ME DOWN
by Melanie Thorne
Fiction

THE LIFEBOAT
by Charlotte Rogan
Fiction

THE SHRINE
by Cristina Odone
Fiction

TOMMASO AND THE BLIND PHOTOGRAPHER
by Gesualdo Bufalino
Fiction

THE COURTYARD OF DREAMS
by Anna Monardo
Newsletter sign-up