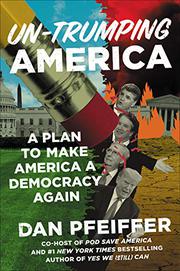 Democrats must get it together if they hope to win in 2020 and reverse what the author sees as the anti-democratic current dominating American politics.

In a natural follow-up to his bestselling Yes We (Still) Can (2018), Pfeiffer, a former senior adviser to President Barack Obama and co-host of Pod Save America, combines an unrelenting assault on Donald Trump and the GOP with outlines of a plan for Democrats to win elections and reverse the current course of the country. He begins with an analysis of how the GOP has accomplished what it has—virtually all of which he despises and derides. Among his principal villains are Fox News, the Koch brothers, Mitch McConnell, and Paul Ryan, whom he ridicules in a final section titled “Bonus Content: A Paul Ryan Rant for the People in the Back.” Pfeiffer aligns the GOP with racism and with cynical appeals to white voters; he condemns gerrymandering, voter purges, and the Citizens United decision; he declares that the GOP puts winning and party above country. To remedy all this, the author offers dozens of pages of suggestions for Democrats—e.g., change the media strategy (go more for social media), diminish the role of big money in campaigns, expand voter registration and turnout, make major changes in the Senate (eliminate the filibuster), and reform the design of the Supreme Court. He ends each of the later chapters with suggestions for “What You Can Do To Help.” Of course, the author realizes that none of these reforms can occur without big Democratic victories in the House, Senate, and White House. Throughout, Pfeiffer pulls no punches. He blasts Fox News for “pure partisan propaganda,” labels Brett Kavanaugh “a moral travesty,” and calls the National Rifle Association “one of the most evil and effective forces in politics.”

An admonitory and heavily—unsurprisingly—partisan book that offers gleams of hope to those feeling hopeless.