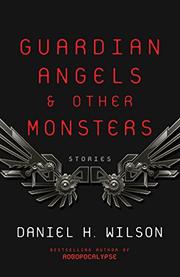 GUARDIAN ANGELS AND OTHER MONSTERS

Any fan of Wilson’s should definitely pick up this paperback original, composed of stories clipped from pulpy collections like The Mad Scientist’s Guide to World Domination (2013) and sprinkled with a few richly imagined anomalies. In the opener, “Miss Gloria,” a robot named Chiron resurrects himself time after time until his ward can fend for herself. In the tear-jerker “The Blue Afternoon That Lasted Forever,” an astrophysicist spends one last day with his 3-year-old daughter. A mechanical man questions the nature of his identity in “Jack, the Determined.” Seemingly a master of many subgenres, Wilson can nod to cyberpunk in “The Executor,” hard science fiction in “Helmet,” and speculative horror in “Blood Memory.” He grounds his characters, even in worlds disappearing before their eyes, by giving them identities through their occupations: we meet a meteorologist in “Foul Weather” and a taxonomist in “Garden of Life,” both trying so hard to understand a world torn asunder by forces they can’t understand. As one imagines he might, Wilson pays fan service to longtime readers with a Robopocalypse story, “Parasite,” set in the trenches of war and starring Lark Iron Cloud and a lovely steampunk slice from the world of The Clockwork Dynasty, “One for Sorrow,” starring the ever childlike avtomat Elena Petrova. These tales sound thrilling, and they often are, but Wilson has a special talent for wringing emotion out of his tech-tinged stories, from the love of a grandfather in “The Nostalgist” to the awful longing of an avatar who misses his true love in “God Mode.” Wilson sticks the landing with “Special Automatic,” a story that channels the movie My Bodyguard by way of a Frankenstein-ian automaton.

A lush and imaginative collection of stories that brings real emotion to hard science fiction.