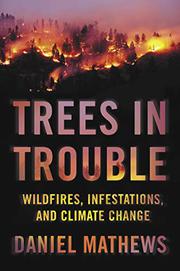 A walk in the woods with an environmental journalist and natural-history writer reveals that the forested world is in grave danger.

As Oregon-based naturalist Mathews (Natural History of the Pacific Northwest Mountains, 2017, etc.) writes, there are 113 species of pine tree, the most abundant and various of any conifer genus. All are in trouble to one extent or another because of climate change, from saplings to “living pine trees older than the Egyptian pyramids.” The author roams the world and the scientific literature to examine the many threats that pines face and their previous adaptations. The logic of the lodgepole, for instance, is impressive: Its cone carries a resin that melts at 113 degrees Fahrenheit, protecting the seeds inside the cone from fire. “The fire kills the pines but melts their cone-sealing resin,” he writes; “the cone scales open over several days or weeks, shedding seeds upon a wide-open seedbed.” Massive fires being an increasingly common phenomenon, particularly in the West, this adaptation is highly useful. On that note, Mathews observes, many forest scientists believe that there’s a kind of self-fulfilling prophecy in the fire regime—i.e., the kinds of dense forests we cultivate demand huge fires. American logging trucks seem somehow incomplete without their loads of giant trees, after all, whereas European foresters favor smaller trees that wouldn’t make for ship masts or I-beams but that do just fine to make studs. In many places, the destruction of fire pales next to that of pine borer beetles, both a harbinger and an effect of climate change. It’s difficult to control both, though, as Mathews writes; the cost of protecting homes in forests by doing such things as burying power lines is often so high that people have little motivation apart from self-preservation to do that necessary work. And, asks the author, “if self-preservation isn’t a motivation, what would be?” His book sounds a timely warning to pay more heed to the health of the woodlands.

Thoughtful environmental reportage suggesting that the fate of trees is the fate of all life.