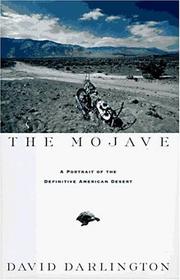 A Portrait of the Definitive American Desert
by David Darlington
BUY NOW FROM
AMAZON
BARNES & NOBLE
GET WEEKLY BOOK RECOMMENDATIONS:

 A grand tour of America's ``most visible, vulnerable, and emblematic'' desert place, the Mojave. With the same enthusiasm and devotion he brought to two previous books (In Condor Country, 1987, and his exploration of zinfandel, Angel's Visits, 1991), Darlington takes on the Mojave, home of the Joshua tree and Death Valley, and the setting for many a western film, a wilderness only a day's drive away for over 40 million Americans. As Darlington notes, deserts no longer project the evil image they once did of deadly, godforsaken lands, their vegetation twisted, their inhabitants even more so (Charles Manson was a desert dweller, as was Bugsy Siegel). Today, says Darlington, these sere spaces are considered not bizarre but awesome, not barren but austere, quite beautiful and full of life. And life Darlington finds, in spadefuls, as more and more people have been drawn to the Mojave: some good folks, some venal, most eccentric, and almost always entertaining. He searches for the southernmost Joshua with an iconoclastic museum curator; pokes about with geologists and historians as they seek to find out what went on there in the recent or distant past; spends time with a rancher in an effort to understand the impact of grazing on such a fragile environment; hangs out with low-rents and high-brows, UFO watchers, miners, ORV fanatics, all of them, for their own reasons, devoted citizens of the arid wilds. The author ponders why the desert is so dumped on, from common garbage to nuclear waste. He savors the desert's fauna, particularly in a superb rendering of the tortoise, and he is especially good at capturing the desert as a land of opposites: epiphanic and excruciating, sensual and despairing, wide open yet palpably mysterious: ``In its enormity, it constantly challenges you to comprehend it, to come to terms with infinity.'' The best kind of place study--it makes you want to go there.