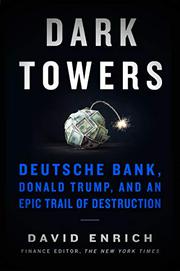 A deep-reaching look at the inner workings of Deutsche Bank, Donald Trump’s lender of choice.

At the heart of this aptly titled book is the suicide of a Deutsche executive in 2014 and the subsequent quest of his son to find out the reasons for it. That story, well rendered by New York Times finance editor Enrich (The Spider Network: How a Math Genius and Gang of Scheming Bankers Pulled Off One of the Greatest Scams in History, 2017), takes many twists and turns, but its outlines are familiar: A corporation with a dodgy history (including financing the construction of Nazi death camps) goes straight for a time, guided by people of conscience who are eventually overwhelmed by executives willing to let ethics slide in the quest for profit. The latter category includes a banker who sat onstage at Trump’s inauguration—and without whose legally problematic help, Enrich suggests, Trump would never have attained office. While many financial institutions refused to lend to Trump because of his habit of reneging, Deutsche was “the only mainstream bank consistently willing to do business” with him—and at the time of the presidential election, he owed the bank $350 million. But did he really, or was the bank merely a front for funding from other sources headquartered in Moscow? The author works his way through a spaghetti tangle of leads with all sorts of unsavory connections, including the family of Trump’s son-in-law, members of whom “were moving money to the Russians at the same time that Russia was interfering in the American presidential election.” The implications are more than suggestive. What is inarguable, by Enrich’s account, is that Deutsche suffered through a clash of corporate cultures by which one side strived to comply with such things as financial stress tests while worrying that a newly elected Trump would default, leaving it “the ugly choice between seizing the president’s personal assets or not enforcing the loan terms,” even as the other continued corrupt practices for nearly two decades.

Following the money becomes easier in this thoroughly researched, if dispiriting, work of investigative journalism.