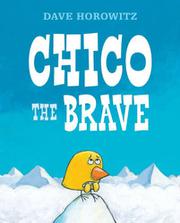 Chico is a chicken—in both senses—until adventure earns him the title “The Brave.”

Hatched in the Andes, Chico is literally terrified of his own shadow: “HELP! I’m being followed,” he cheeps as he scurries away. Attempting to comfort his son, Chico’s father invents a story about The Golden Chicken, saying, “Whenever there’s trouble, he, um, swoops down from those there mountains like lightning and saves the day.” Emboldened, Chico sets off to find his new hero, a bindle clutched under his wing. As he ventures forth, he passes a rooster hanging up "Wanted" posters of some nefarious-looking llamas, foreshadowing his eventual encounter with a herd of those same tough camelids—llamas who tease him when he asks about his hero. They send him on what might be termed a wild Golden Chicken chase to the top of a very tall, very scary mountain. Chico perseveres, only to end up being blown down from the mountaintop by a gust of wind. The llamas, now up to no good and persecuting Chico’s flock, see him descending and wonder if there really is a Golden Chicken superhero after all. They take off, and Chico emerges as the hero of his village.

A humorous, original tale about one plucky clucker, distinguished by vibrantly colored, cartoonish illustrations that match the text’s hilarity on every page. (Picture book. 4-8)