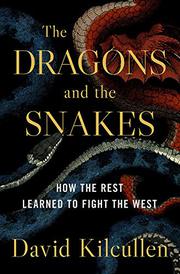 THE DRAGONS AND THE SNAKES

How the Rest Learned To Fight the West
by David Kilcullen
BUY NOW FROM
AMAZON
BARNES & NOBLE
LOCAL BOOKSELLER
GET WEEKLY BOOK RECOMMENDATIONS:

An eye-opening look at the state of strategic balance between the United States and its rivals, large and small.

Drawing on his experience in counterinsurgency both as an adviser in Iraq and Afghanistan and as a consultant in counterterrorism measures, Kilcullen (Global Security/Arizona State Univ.; Blood Year: The Unraveling of Western Counterterrorism, 2016, etc.) provides lessons on how America’s rivals have adjusted their strategies to effectively take on the global superpower. After the quick and overwhelming victory in the 1991 Gulf War, it became obvious that no conventional military force stood a chance against the sort of power the U.S. could unleash on the battlefield. At the same time, the Cold War was ending, and with it the threat of nuclear Armageddon—or so it seemed. That did not mean an end to challenges to American power, and as the Vietnam War had shown, there was more than one way to fight. Kilcullen looks at the strategies used by several adversaries, from the Islamic State group and Hezbollah to Iran and North Korea, which have achieved various degrees of success. In many ways, the most provocative parts of the book are the author’s discussions of Russian “liminal warfare,” which deploys a large array of tactics, pushing the boundaries to just short of battle. Equally challenging is the Chinese doctrine of “conceptual expansion,” which expands competition to include not only trade and economic warfare, but ecological, regulatory, and media warfare—and perhaps even smuggling and other criminal activities, many of which are deniable. A running theme is the idea of evolutionary change, as nations and nonstate actors adapt to the “fitness landscape” they inhabit. As Kilcullen points out, America’s adversaries have adapted more quickly than the U.S., and the result may well be the end of the American empire. The author delivers a detailed and unsettling analysis of how America’s rivals have adapted to the modern strategic landscape—and how they hope to defeat us.

Essential reading for anyone concerned with America’s future on the world stage.

OUT OF THE MOUNTAINS
by David Kilcullen
Newsletter sign-up