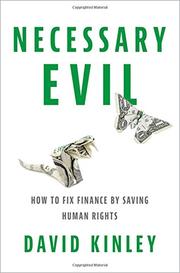 Can banks become a force for public good? They can, according to this provocatively argued book, if made to do so.

Finance, writes Kinley (Chair, Human Rights Law/Univ. of Sydney; Civilising Globalisation: Human Rights and the Global Economy, 2009, etc.) is not in itself the font of evil that some critics make it out to be. In fact, it has “helped liberate individuals and peoples alike by providing them with greater independence, freedom, security and self-respect.” Yet, as an instrument of predatory capitalism, finance has become a means of oppression, as rich states and individuals use it to control markets and impose their will by means of “odious debt” and as the mechanisms of state power increasingly favor a tiny class of oligarchs at the top of the heap. The author aims to find ways to reclaim finance as a means of doing good by aligning it with the humanitarian goal of improving the lives of everyone. There’s some pie in the sky in all that, but Kinley is a hard-nosed analyst of the economic and the geopolitical; his technical discussions of derivatives, debt servicing, and the like show as much. One means of applying finance to human rights interests is in equitable taxation, although the author adds that there “exist a range of other public financial streams that impact upon human rights standards, or that have the capacity to do so.” Against the possibilities of microfinance, debt forgiveness, and the like, Kinley contrasts the behavior of large financial institutions, including banks in his native Australia, one of whose chairmen protested that “Adolf Hitler comes to mind” when confronted with the possibility that banks might be held criminally liable for criminal behavior. Kinley’s argument is sometimes-dense, but it is also a richly suggestive exercise in what he calls “cautious hope.”

Aligning economic and human rights goals might be a pipe dream, but “helping others as well as yourself” ought to be a no-brainer. Thoughtful reading for the humanitarian audience.

A WORLD OF THREE ZEROS
by Muhammad Yunus
Newsletter sign-up