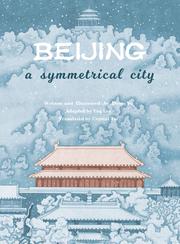 Part architectural tour, part intro to Chinese history and culture, this book showcases one of China’s most famous landmarks.

Beijing is one of the world’s oldest cities, and its architectural layout was begun during the Yuan dynasty in the 13th century. It was further developed during the Ming (14th to 17th centuries) and Qing dynasties (17th to 20th centuries). This book showcases Beijing as it was during the Qing period, China’s last royal dynasty. Like many traditional Chinese cities, Beijing was built symmetrically, with a central axis that forms its backbone. Major buildings were placed on either side of the axis, with the Imperial Palace, also known as the Forbidden City, at the center. Yu takes readers on a walking tour along the nearly 5-mile-long central axis, starting at the south end of the city and ending in the north. Stops include old Beijing’s business district, Tiananmen Square, and the Hall of Supreme Harmony, where business, official ceremonies, and banquets took (and still take) place. Colorful, finely detailed illustrations are placed, often symmetrically, over double-page spreads; one double gatefold depicts the Forbidden City’s grand architecture. The illustrations are breathtaking, but unfortunately, the text is not. Readers learn that on either side of the central axis, “buildings share the same color scheme and style but differ in size and height.” The author tries to liven up the somewhat dry descriptions and recitation of historical facts with sidebars of “Fun Facts” and “Knowledge Tips,” but the small, dense text, set in italicized, low-contrast, brown type, can be a chore to read.

Beautifully rendered drawings are a feast for the eyes, but engaging historical context is lacking. (timeline, glossary, afterword, bibliography) (Nonfiction. 10-14)

IN THE FORBIDDEN CITY
by Chiu Kwong-chiu
Children

WHAT WAS IT LIKE, MR. EMPEROR?
by Chiu Kwong-chiu
Children