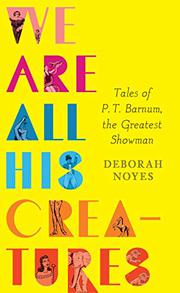 WE ARE ALL HIS CREATURES

Noyes (Tooth and Claw, 2019, etc.) explores P.T. Barnum’s career from the perspectives of his family members, performers, and acquaintances.

Barnum, the “Prince of Humbug,” rose to fame by exhibiting—and exploiting—a collection of human and animal “wonders.” But here, Jumbo the elephant and the Fejee mermaid aren’t the showman’s only “creatures.” In 11 intertwined, third-person stories spanning from 1842 to 1891, the author imagines the perspectives of those in Barnum’s narcissistic shadow—from his belittled, overwhelmed wives and overlooked daughters to such celebrated performers as the little person Charlie Stratton, aka General Tom Thumb, who pays for his fame by losing his identity. The disparate cast is united by similar themes: loneliness; the simultaneously empowering and disempowering nature of performing; and the pressures of living in the public eye. Though the stories create a vivid, dark impression of Barnum’s personality, many other characters’ development is shallow and disjointed. Further details of characters’ lives are scattered among other characters’ stories, and keeping track of the crowded cast across a multigenerational time span is an occasionally taxing, ultimately underwhelming exercise. Several characters’ fates are rather abruptly summarized, and expository prose and dialogue dull poignant emotions and backstories. A slightly supernatural plot thread is left dangling. Most characters appear to be white. Archival photographs introduce each story.