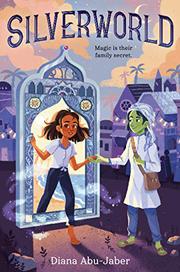 A girl struggling with change finds herself swept into a fantasy “world next door” heavily informed by her Lebanese-immigrant grandmother’s stories.

Samara Washington lives in Coconut Shores, Florida, with her mother, Alia; brother, Tony; and maternal grandmother, whom they call Teta. Her American-born father passed away when she was young. Although it’s been about a year since they moved from Ithaca, New York, she has not made “real friend-friends” like the ones she left behind. Worse, Teta’s changed, speaking gibberish to everyone except Sami, when they are alone. Alia is thinking about moving Teta to a nursing home, something Sami energetically opposes. Teta’s told Sami stories about the magic in their family—stories about another world with magical sprites called Ifrit and air and light beings called Flickers. Convinced that Teta is under a spell, Sami finds her grandmother’s charm book and uses it, entering Silverworld, a parallel world that, like Teta, is in terrible danger. Sami must decide whether she will confront the force that threatens Silverworld or go back home. In the tradition of epic fantasy, Sami will be tested and face her greatest fears. In her first novel for children, Abu-Jaber (Life Without a Recipe, 2016, etc.) includes pieces of Beirut that were part of Alia’s and Teta’s lives in Lebanon—meals they prepared together like kibbee, bamia, and tabbouleh; the adthan, or call to prayer—evoking a powerful image of that place while acknowledging Sami’s bicultural American experience.

ARU SHAH AND THE END OF TIME
by Roshani Chokshi
Children