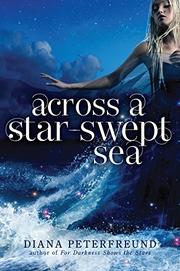 ACROSS A STAR-SWEPT SEA

Peterfreund follows up her post-apocalyptic version of Persuasion (For Darkness Shows the Stars, 2012) with a gender-flipped Scarlet Pimpernel.

On a Pacific island in a high-tech future, 16-year-old Persis Blake seems the epitome of a lady: beautiful, charming, stylish…shallow and stupid. The Wild Poppy, her alter ego, is clever, courageous and noble, crossing the sea to rescue aristos imprisoned by the tyrannical revolution. Dashing young medic Justen Helo claims to have turned against the revolution that betrayed his family’s legacy—but can Persis trust him with her secret? Beneath the science-fiction veneer, the plot follows its source almost beat for beat, sacrificing some swashbuckling and suspense for lush scene-setting, secondary character development and a large dose of teen angst. The interplay between appearance and reality runs throughout: If the Poppy is a master of deception, every other player also wears masks, and everyone fails to look beneath the surface. Most, interestingly, are female, and while the different paths available for women to pursue heroism (and villainy) are subtly examined, the portrayal of their friendships shines. The narrative also raises thoughtful questions about class and gender bias, but it ultimately shrugs off the ramifications; feudalism is fine if the lords are nice enough, and though everybody rails against sexism, no one actively bothers to challenge it. While this title stands alone, cameos from the previous tale will please fans.

A good bet for readers looking for strong female protagonists, characters of color or just an enjoyable romantic adventure with a science-fiction spin—especially if they haven’t read the original. (Science fiction. 12 & up)

FOR DARKNESS SHOWS THE STARS
by Diana Peterfreund
Children

TELL THE WIND AND FIRE
by Sarah Rees Brennan
Children