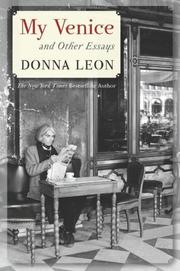 MY VENICE AND OTHER ESSAYS

An American mystery writer reveals a new character: herself.

Leon (The Golden Egg, 2013, etc.) is the author of the Commissario Guido Brunetti mysteries, set in Venice, where she has lived for more than 30 years. In this new collection, Leon muses about that celebrated city, its inhabitants and visitors, unique landscape, arts, culture and food, and also about men, music, animals—and America, which, she admits, she continues to call “home.” Most of the pieces are very short, more like journal entries or blog posts than well-structured essays; at best, their form gives them an easy, conversational quality. At worst, they flit too quickly from thought to thought as Leon reveals her passions—for Baroque opera, for example—and her many strong dislikes. Here, a selective list is in order: fat people, hunters, the treatment of women in Saudi Arabia, self-absorbed American men, the proliferation of the words “like” and “I mean” in American speech, sanctimonious diplomats, the grim players of slot machines, and the hordes of tourists who defile whatever place they visit, causing “far greater harm to the planet than have terrorist bombs.” Leon writes warmly about music and animals, offering a charming portrait of the modest and articulate mezzo-soprano Anne Sofie von Otter, an artist she much admires. A lifelong “dog addict,” the author fell in love at first sight with Blitz, a dog trained to sniff out drugs and bombs. The essays grouped under the heading “On Books” are not, as readers might expect, about literature but instead include her experiences with the seduction of email, her astonishment over a physician’s powers of observation and her incredulity about the outpouring of grief at Lady Diana’s death.

An uneven collection showing Leon to be a cranky, though sometimes witty and insightful, critic of her times.

UNTO US A SON IS GIVEN
by Donna Leon
Mystery

THE TEMPTATION OF FORGIVENESS
by Donna Leon
Mystery

THE WATERS OF ETERNAL YOUTH
by Donna Leon
Mystery

BY ITS COVER
by Donna Leon