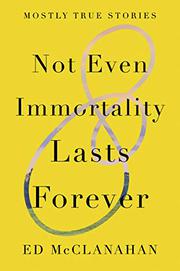 NOT EVEN IMMORTALITY LASTS FOREVER

Autofictional tales about the author’s Kentucky childhood, friendship with Ken Kesey, and relationship with his memories.

In “A Work of Genius,” the opening piece in this shaggy but moving collection, McClanahan (I Just Hitched in From the Coast, 2011, etc.) tells the story of the day, in 1947, when an aging bicycle performer named Kramer visited Brooksville, Kentucky, and more or less wowed the pants off young McClanahan (then age 14) with his “uncanny kinetic miracles of equilibrium and grace and strength.” In the seven intervening decades, McClanahan then says, he “recounted Kramer’s wondrous exploits times beyond number, to family, friends, and all manner of other captive audiences,” and, “over the course of all those tellings and re-tellings, the story took on something of a life of its own…and gathered unto itself certain adjustments, embellishments, flourishes, and adornments, to the point that eventually I wasn’t quite sure I still recognized it myself.” McClanahan’s project here, though—in both “A Work of Genius” and, the reader must assume, the tales that follow—is to shed these “fanciful trappings” and, using a mixture of “quasi-reliable details” and limited creative license, fix some core version of his story “permanently…in writing.” Disclaimer aside, McClanahan then lures the reader—with his trademark jocularity and bountiful prose—through the wistful banalities of a midcentury, middle-American boyhood. His anecdotes wind together, flowing almost associatively, and cover topics such as his infatuation with cigarettes; his fraught relationship with his entrepreneur father (“we were a well-oiled perpetual animosity machine"); a mismatched freshman year at a “Southern Gentleman’s college,” here called “Eustace J. Spoonbred University”; his friendship with Ken Kesey; and his lifelong appreciation for the Cincinnati Reds. If a couple of McClanahan’s stories seem fundamentally inessential—case in point: “Me and Gurney Goes Out on the Town,” in which the author recalls seeing (or says he does) a go-go dancer violently eject a verbally abusive patron from a seedy bar—the book, taken as a whole, performs a genuinely beautiful act of post hoc portraiture, eventually building into a protracted study of McClanahan's relationship with the erosive nature of time and the happy-sad miracles of memory.<

GONE WITH THE MIND
by Mark Leyner
Newsletter sign-up