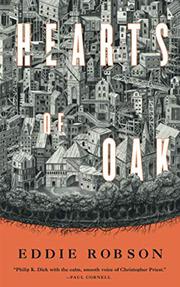 Iona is the city’s leading architect. She has a comfortable life: She teaches, she likes her work, and her house, at the planning department’s insistence, is so much bigger than she needs that she rarely visits its upper stories. But when a young woman named Alyssa appears in her office asking for one-on-one instruction, Iona finds herself moved to tears by the woman’s hat, which is made of something she thinks is called felt—a “dream-word.” This strange intrusion of dreams into her reality, of “things that didn’t exist but that somehow meant a lot to her anyway,” will send her on a quest to uncover the truth about her perfectly pleasant but not-quite-right life. Meanwhile, up in his tower, the king wonders if he ought to have gone to the funerals for the victims of a building-site collapse. But his cat, Clarence, says there’s no need for that sort of thing, and Clarence is probably right. Still, the king feels—lonely. Both Iona and the king have a vague, nagging sense that something is a bit off about this city, that something is missing in their busy, purposeful lives. But what Iona eventually discovers is much, much stranger than either of them could have imagined. The deep sense of puzzling oddness in the beginning of this book is totally captivating. The surface-level mildness and niceness of this world underscore the sense of mystery and offer plenty of opportunities for comedy. Once the reason for all the oddness is revealed, the story does lose some of its drive. But Robson (Tomorrow Never Knows, 2015) manages to rekindle the suspense for its final push.

Strange, charming, unpredictable, and full of unusual images, this is an off-the-wall delight.