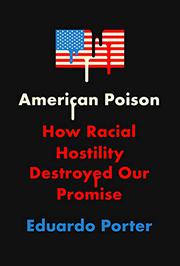 An argument that racism as practiced by whites in the United States doesn’t just hurt people of color.

Born in Phoenix to a white American father and a darker-skinned Mexican mother, New York Times economics reporter Porter (The Price of Everything: Solving the Mystery of Why We Pay What We Do, 2011) writes from his personal experience as a perceived nonwhite and his professional perspective as a skilled journalist who has worked in Mexico City, Tokyo, London, São Paulo, and Los Angeles. The author clearly delineates a wide variety of conundrums that face American citizens, exacerbating divisions and hurting everyone. These include poorly funded public schools, many of them segregated by race and ethnicity; massive prison populations with no meaningful rehabilitation services for the inmates; untrammeled gun ownership leading to a form of violence unmatched anywhere else in the world; the criminalization of drugs without adequate recognition that addiction is often a curable disease rather than a reason to lock someone up; and housing discrimination, which leads to massive income inequality as well as other persistent societal ills. The author capably pulls the strands together to demonstrate one of the narrative’s most important ideas: how the U.S. lacks a true safety net, not just for people of color, but also for lower-income whites. Some of Porter’s examples fall outside conventional narratives about racism. For example, when labor unions exclude people of color as members in order to protect well-paid white laborers, worker solidarity becomes fractured, social unrest increases, and everybody loses as the funds for adequate health care drain community resources. When assistance to truly needy people of color is denied with the rationale of “welfare abuse,” low-income whites are left to drift as well. And as the author makes clear, none of this is new. “Trump’s election may have exposed America’s ethnic divisions to the unforgiving glare of the klieg lights,” he writes, but these problems “have been lying in America’s underbrush for a long time.” In a final chapter about the future, Porter finds little reason for optimism about reduced racism.

Another solid addition to the necessarily growing literature on one of America’s most intractable issues.