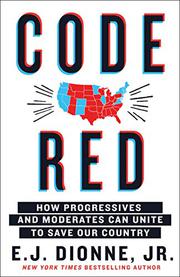 How Progressives and Moderates Can Unite To Save Our Country
by E.J. Dionne Jr.
BUY NOW FROM
AMAZON
BARNES & NOBLE
LOCAL BOOKSELLER
GET WEEKLY BOOK RECOMMENDATIONS:

The Washington Post columnist and NPR commentator offers a passionately reasoned argument for why both progressive and moderate wings of the Democratic Party must put aside differences to defeat Donald Trump in 2020.

Seizing on the momentum of the 2018 midterm elections, Dionne Jr. (Why the Right Went Wrong: Conservatism From Goldwater to the Tea Party and Beyond, 2016, etc.) is both articulate and enthusiastic about the need for the two liberal sides to work together, and he readily admits that he sounds like “a perhaps unwelcome counselor attempting to ease a family quarrel.” The success of the 2018 elections (“Democrats received 25 million more votes than they had in 2014”) underscores how the alliance of progressives and moderates, interested in protecting health care and reforming politics, can serve as the “model for the alliance that must come together again in 2020 and beyond.” The author discusses the important mobilization of African American and Latinx voters, young people, and, especially, suburban women, many of whom have been disgusted by Trump’s “white ethno-nationalism, his lies, his extremist rhetoric, his self-centered irrationality.” Indeed, the election was very much about Trump, though not in the way he had hoped. Systematically, the author shows why bipartisanship, once the catchword, is not currently viable with the growing homogeneous, anti-immigrant Republican Party, which looks nothing like the “decent pragmatism” of the party of presidents Lincoln, Eisenhower, or even Nixon. The author then pursues the “crooked path” of the progressive story in America and the resurgence of democratic socialism in reaction to Reaganism and the continued rise of inequality even after the Clinton and Obama years. Indeed, writes Dionne, the “socialist” proposals of universal health care, free college, and even the Green New Deal are not radical. Moreover, a Democratic coalition is needed to repair the many fractured relationships with American allies.

A well-argued and persuasive treatise by a deeply concerned journalist and citizen.

ONE NATION AFTER TRUMP
by E.J. Dionne Jr.
Nonfiction