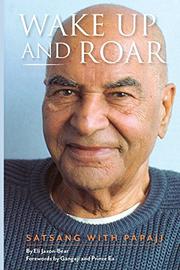 WAKE UP AND ROAR

A series of spiritual conversations led by a teacher of enlightenment.

Sri Harilal W. Poonja was born in 1910 in Gujrawala, India. His mother was the sister of Hindu Swami Ram Tirtha, a celebrated religious figure. A spiritually precocious child, Poonja eventually grew to become a disciple of the Hindu sage Ramana Maharshi. Author Jaxon-Bear (Sudden Awakening, 2012, etc.) met Poonja, commonly known as “Papaji,” in Lucknow, India, in 1990 and was entranced by the depth of his teachings. The bulk of this book is an assemblage of transcripts of Poonja’s satsangs—group conversations led by a spiritual teacher, reminiscent of Socratic dialogues. These discussions took place over more than a year, from January 1990 to April 1991, in Poonja’s home and covered a remarkable swath of philosophical ground, discussing such things as the nature of true freedom and enlightenment, the distinction between nirvana and samsara, meditation, love, and death. The thematic twine that holds it all together, though, is the goal of emptiness—a transcendence of dualistic conceptualizations that create the illusion of the separation of the self: “The Self contains everything,” said Poonja. “There is nothing apart from it. This is why you can call it emptiness. There is nothing beyond emptiness. All is empty. Nothing ever exists.” Jaxon-Bear ably provides context for readers to understand these discussions as well as a concise biography of Poonja. The conversations aren’t always easy to digest and may prove esoteric to those unfamiliar with Eastern spirituality. However, Poonja is shown to be a truly gifted and charming teacher, and the dialogues repay careful attention. There are also some engaging departures from traditional Buddhist doctrines; for example, Poonja rejects the notion of cosmic karma and criticizes the Dalai Lama’s teachings regarding the nature of morality, or “right action.” The whole book is a fount of provocative wisdom.

A succinct introduction to an intriguing set of spiritual teachings.

AN OUTLAW MAKES IT HOME
by Eli Jaxon-Bear

BEYOND RELIGION
by Dalai Lama
Fiction

ZEN IN THE ART OF WRITING
by Ray Bradbury
Indie