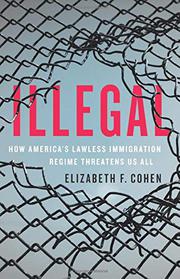 How America's Lawless Immigration Regime Threatens Us All
by Elizabeth F. Cohen
BUY NOW FROM
AMAZON
GET WEEKLY BOOK RECOMMENDATIONS:

A political scientist offers a concise but unflinching look at the barbaric state of immigration in America and a few ideas, possibly viable under the right conditions, to make things decent again.

Most readers understand that the immigration system in the United States is deeply flawed, a state exemplified most vividly by news reports of children in cages at the southern border. Cohen (Political Science/Syracuse Univ.; The Political Value of Time: Citizenship, Duration, and Democratic Justice, 2018, etc.) takes a close look at the players: Customs and Border Patrol, the relatively new Department of Homeland Security, and, most importantly, Immigration and Customs Enforcement, which was founded in 2003 and functions with near impunity when it comes to immigration issues. This is a nicely succinct portrait of one of the most pressing issues of the day, and Cohen is openly cautionary in her approach. “If ICE and CBP are allowed to continue on their current path,” she writes, “we are only a short leap to a time when any citizen could hear a knock on their door and encounter uniformed officers on the other side who are ready to take their property and possibly their family into the custody of the US government. Or perhaps the government will look the other way as a private militia group targets us.” The author is a sharp examiner of the relevant data and research, and she is shrewd enough not to drown in the political quicksand surrounding immigration. However, she doesn’t shy away from controversy, exploring the dangers of white nationalism and taking into account the pragmatic reasons to formulate a fair immigration policy that doesn’t prostrate itself before communal fear. Cohen never ignores the fact that cruelty is often the point of many of the country’s current immigration policies, and she shows how it’s an issue “that affects not just immigrants but anyone in this country.”