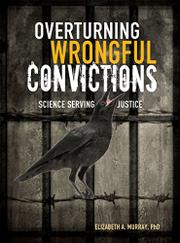 So very rarely is anything perfect, but when the legal process malfunctions, the result can be the horror of unjust incarceration.

It is estimated that 2 to 5 percent of the American prison population—that is, 40,000 to 100,000 souls—are wrongly behind bars, writes veteran forensic scientist Murray. They are the victims of inept counsel, snitches looking for a payday, judges guilty of official misconduct (“such as bias, corruption, or incompetence”), police bullying, flawed or malicious testimony, and racial prejudice—what one attorney refers to as “legal lynching.” But since the late 1980s, a handful of exoneration organizations have worked to overturn wrongful convictions. As Murray writes, they principally address high-profile cases, such as murder and rape, where the consequences can be the death penalty; over the last 25 years, 1,400 men and women have been exonerated. Murray lays a solid foundation for readers, taking them through the legal system’s long road, from questioning all the way to appeal, while explaining how exoneration is achieved, mostly through DNA testing and fingerprints. More rarely it’s achieved by displaying overwhelming evidence of faulty prosecution (as she writes, “Grave mistakes are often the hardest to admit”). Of exonerated prisoners, notes Murray, the average age of incarceration is 27 and the average age of release is 42.

GHOST OF THE INNOCENT MAN
by Benjamin Rachlin
Nonfiction