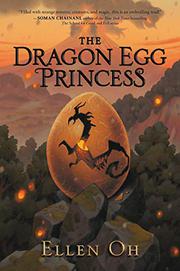 Inspired by Korean folklore, this is a fresh yet ancient take on middle-grade fantasy, filled with magic, supernatural creatures, the rise of darkness, and a dragon.

Jiho comes from a long line of forest rangers, protectors of the Kidahara, the magical woods in the center of the country. Five years ago, Jiho’s father walked into the woods never to be seen again, just like Princess Koko. Joson’s king, still pining for his daughter, is being challenged by his younger half brother, Prince Roku, who enlists foreign aid to wipe out the deadly forest in the name of progress. Jiho, whose very presence negates magic, must band together with a rich collection of magical forest creatures and kids from outside Joson to stop the awakening of Luzee, the dark sorceress bent on destroying the world. The plot meanders at the start but gathers enough speed to keep the pages turning. Familial betrayal, environmental destruction, and the trickiness of trust collide in an existential race to stop the devastation. Themes recognizable from fantasy favorites such as The Lord of the Rings, Game of Thrones, and even Harry Potter are reconfigured with Asian-inspired settings and multicultural characters whose names and appearances are both Asian- and Western-derived. The familiarity, however, is spiced with enough novelty to satisfy those who devour fantasy titles.

With its quick pace, modern heroes, and choreographed action, this is a strong fantasy title with K-pop undertones. (Fantasy. 8-12)