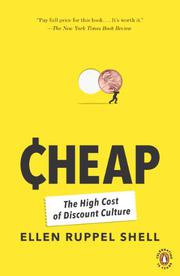 Or, supersaturate me with enough junk to clog the arteries of the good life.

Those who remember the early 1970s, writes Atlantic contributor Shell (Fat Wars: The Inside Story of the Obesity Industry, 2004, etc.), may be surprised to learn that, even for all the decline in relative wages and buying power, most of the necessities of life are cheaper today. We pay about a third less for clothing, about a fifth less for food and a quarter less for cars. This lowering of cost, Shell warns, comes at a hidden price, and there lies the heart of her argument, which is as much aesthetic as financial. One of the costs of cheap goods is obvious: Manufacturers chase cheap labor across the planet in order to produce them, which in turn lowers the labor value of American workers. Another of the costs is less obvious: Inexpensive goods devalue the notion of craft. “The ennoblement of Cheap,” writes Shell, “marks a particularly radical departure in American culture and a titanic shift in our national priorities.” The author traces that departure across a trajectory of opinion in which, a century ago, the purchase of mass-produced, inexpensive goods was considered a lapse of taste. This view was largely undone by pioneering merchants such as John Wanamaker (of Philadelphia department-store fame) and Eugene Ferkauf (of Korvette’s), as well as the post–World War II emergence of a particularly acquisitive consumer culture that, as John Kenneth Galbraith grumbled, nursed a battery of “wants that previously did not exist.” Shell’s pronouncements on economics get a bit fuzzy, but her Silent Spring–like moralizing about the effects of superabundant, indifferently made goods will find an eager audience among acolytes of the uncluttered, simple, debt-free life.