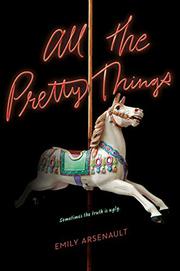 ALL THE PRETTY THINGS

Seventeen-year-old Ivy Cork unearths some long-simmering secrets when she digs into the recent death of one of her father’s employees.

With her older brother, Jason, off at college, Ivy is her dad’s right-hand woman at Fabuland, the Danville, New Hampshire, amusement park he owns and operates and where most of Ivy’s friends work, including her best friend since sixth grade, Morgan Froggett. When Ivy returns to town after a short trip with her mother (her parents are divorced), she’s told that Morgan has been missing since the previous night. Recently 19-year-old Ethan Lavoie, a Fabuland employee with Down syndrome, fell to his death from a train trestle while walking home from the park, and Morgan was the one who discovered his body. After Morgan is found in a state of distress sitting atop Fabuland’s Ferris wheel, Ivy is the only one who can talk her down. When Ivy asks Morgan how she got up there, Morgan replies cryptically “Ask Ethan.” Morgan’s strange answer—and her precarious state of mind—inspire Ivy to investigate the events leading up to Ethan’s death, all while helping her demanding and mercurial father run Fabuland. The amusement park setting is intriguing; however, the mystery is thin, and the meandering narrative is peppered with two-dimensional characters and clunky dialogue. As a result, the eventful final act, featuring a cascade of weighty revelations (including a #MeToo subplot), doesn’t feel earned. A white default is assumed.