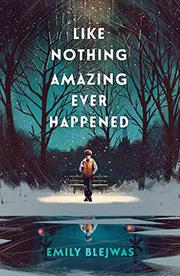 Justin and his family are struggling to adjust to life now that his father has died in an accident—or was it suicide?

One winter day in 1989, Justin’s father, a Vietnam War veteran who was obviously struggling with the aftereffects of his military service, stepped out for a moment. A little while later he was killed by a trolley in their Minnesota town. Justin is haunted by the loss of his father and the way it has twisted their lives. To keep them afloat, his older brother, Murphy, has selflessly given up baseball to work at the KFC, and his mother, too, is working long hours. At school, Justin can feel everyone’s eyes following him, making it hard to regain any sense of normalcy. But there are many bright moments. Cute girl Jenni has taken a deep interest in him, and she’s not the only one. Justin’s best friend, Phuc, bus driver Rodney, and an almost-homeless man named Benny H. also gently provide needed support. With delicious, evocative writing, each character is lovingly depicted, and even a brash classmate that Justin misjudges has an illuminating backstory. As he navigates the days that follow his father’s death, it’s the goodness in all of these caring people that fills his heart. History—both his father’s and the Dakota nation’s, on whose land their town is built—becomes a way for Justin to make sense of the present. Phuc is the only Vietnamese kid at their school; other characters assume a white default.

Filled to the brim with optimism, friendship, and the joyous wonder of innate goodness—fabulous. (Historical fiction. 10-14)