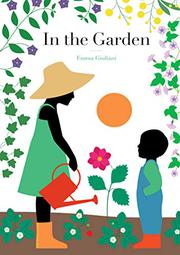 A graphic artist’s view of a small, mixed garden’s seasonal round, enhanced by flaps, inside views, and cut-paper flowers.

In Giuliani’s composed, quietly harmonious scenes, young Plum and her little brother Robin—both depicted as solid black silhouettes—tidy up their patch after its winter sleep, then at proper times sow seeds, repot plants that wintered over in the greenhouse, water and nurture seedlings, set up poles for beans and stakes for tomatoes, then at last, in autumn, gather ripe fruits and veggies before putting the garden back to bed. The book is rife with specialized vocabulary (“involucre,” “peduncle”) that’s either defined in text or clearly illustrated. Each double-page spread is keyed to a particular moment in the season, with a large picture of Plum and Robin on verso. In blocks of commentary alongside smaller, posterlike images of common flora and fruits on and under flaps cut into natural or geometric shapes, Giuliani describes in some detail the parts of seeds and plants, stages of growth, and good (organic) horticultural practices. If some of those practices, such as “install[ing] a beehive” or pouring milk around garden borders to repel rabbits, are presented fairly simplistically, there are still generous enough funds of botanical information and practical advice in this elegantly illustrated, oversized album to fuel winter dreams and schemes.