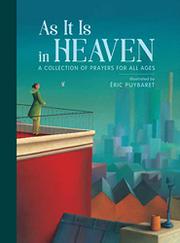 AS IT IS IN HEAVEN

Opening with the Lord’s Prayer (Our Father), the selections chosen include biblical devotions, traditional prayers, and the prayers of saints, all largely in the Roman Catholic tradition. While Protestant audiences will feel the Our Father cuts off abruptly and might bristle at the Hail Mary, there is much to love for the faithful of diverse persuasions. At turns worshipful and introspective, the thoughtful prayers call for mindful compassion, empathetic living, and kindness, generosity, and mercy in the lives of believers. Puybaret, known for his whimsical, dreamlike style, brings that same sense of reverie to the real world in pensive vignettes. Particularly poignant is an illustration featuring a barefoot young man, surrounded by rubble and smoke but enveloped by a soft glow as he reaches out to a young sapling thrusting upward despite the chaos around it, which appears alongside St. Francis’ prayer for peace: “Where there is hatred, let me sow love / … / where there is despair, hope.” Though the prayers of saints are attributed to their authors, sources for scriptural prayers such as the Our Father and Magnificat are lacking references. Sadly, while there are some people of color depicted, most of the people in the illustrations appear white, even those based on Middle Eastern biblical characters.

Though best appreciated by Catholic audiences, an excellent collection for a wide range of Christian believers. (Picture book/religion. 4-10)

HOW DEEP IS THE OCEAN?
by Kathleen Weidner Zoehfeld
Children