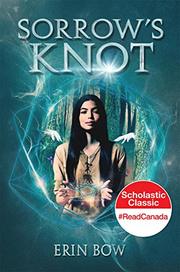 Grief beats at the heart of adolescence in this fantasy version of North America.

For the free women of the forest, death is a complex, dangerous thing: The dead are bound, and some rise again as White Hands, whose touch brings madness and transformation. Bow’s lyrical writing, which beats like the storyteller’s drum Cricket and, later, Orca wield, tells a story both specific and timeless. The conflict between tradition and change, the tensions between mothers and daughters, and the journey west (itself both physical and metaphorical) all play a role. Within the grand thematic scope is a simpler story, reminiscent of the timeless hero’s journey: Otter, the binder’s daughter, untrained and called upon to face great threats, must use the tools of tradition and forbidden knowledge (a secret story echoes throughout the novel) to remake the world. Add to that epic scope two love stories, a genuine portrait of friendship, a nuanced exploration of loss and letting go, and a fine tracery of humor as well as plenty of tears, and you have a winner.

A lovely gem, dark and quiet as the dead but glimmering with life as well. Not to be missed. (Fantasy. 13 & up)

THE COLDEST GIRL IN COLDTOWN
by Holly Black
Children

STAND ON THE SKY
by Erin Bow
Children

REVENGE OF THE WITCH
by Joseph Delaney
Children

THE GIRL WHO CIRCUMNAVIGATED FAIRYLAND IN A SHIP OF HER OWN MAKING
by Catherynne M. Valente
Children