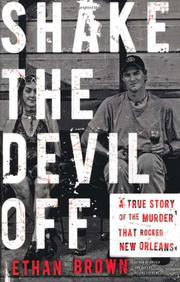 SHAKE THE DEVIL OFF

In October 2006, 28-year-old Zackery Bowen jumped from the roof of La Riviera bar in New Orleans and died instantly upon hitting the concrete. In his pocket was a suicide note explaining that he’d dismembered his girlfriend Addie Hall, with instructions on specific places where police would find her severed body parts. “By the spring of 2007,” writes the author, “I had begun to realize that the story of Zack Bowen was not that of a voodoo-inspired, drugged-out French Quarter killer.” Instead, the author uncovered the tragic story of a musician turned Iraq war veteran who suffered from post-traumatic stress disorder upon his return home. “Zack’s untreated PTSD triggered a free fall,” writes the author, “from the dissolution of his marriage to trouble at a string of low-paying jobs to an abusive relationship with Addie that ended so tragically.” Captivated by the story, Brown moved to New Orleans for his research, tracing Bowen's life from childhood through his Iraq tour, followed by his military release, new life as a bartender and rapid spiral into depression and drug abuse. As Katrina approached the coast, Bowen and Hall’s relationship intensified, but in the post-Katrina maelstrom, their relationship slowly melted down into abuse and drunken violence. Hopelessly codependent, after numerous breakups and reunions, Bowen eventually strangled Hall to death, then butchered her body, describing the planned disposal process in detail in her diary before deciding his own end. Drawing the parallel between Katrina's aftermath and Bowen's unraveling psyche, Brown creates a riveting portrait of a gruesome crime while detailing the heart of a city in distress.

A grim murder-suicide story delivered with skill and verve.

A SUMMONS TO NEW ORLEANS
by Barbara Hall
Fiction

A CONFEDERACY OF DUNCES
by John Kennedy Toole
Nonfiction

MURDER IN THE BAYOU
by Ethan Brown
Nonfiction