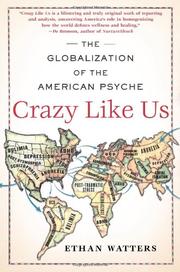 Americans may not be any more deranged than anyone else on the planet—but, says pop social scientist Watters (Urban Tribes: A Generation Redefines Friendship, Family, and Commitment, 2003, etc.), we are much better at universalizing our afflictions.

“We are engaged,” writes the author, “in the grand project of Americanizing the world’s understanding of the human mind.” But who is we? There’s the rub, for there is a strong cui bono element in the idea that our psychic well-being or lack thereof should be transportable across borders. But first, the evidence, about which Watters writes sympathetically and elegantly, of the rise of Western-style mental illnesses around the world. None of this should be particularly surprising, given the fraught nature of human life, but Watters adds a twist: The very idea of such maladies is often new, introduced from abroad. Thus, even though given the importance Chinese people traditionally place on food, something like “food refusal” should have been a natural form of rebellion, anorexia was rare until recently, when the Western clinical concept entered the Chinese medical literature at the same time the Chinese mass media began to pay attention to rail-thin Western celebrities and models. By Watters’s account, when the great Indian Ocean tsunami struck Sri Lanka at Christmas 2004, Western clinicians imported the idea of “the kind of mental abscess that results in PTSD” instead of trying to understand the interpretations of the event in the survivors’ own terms. So who benefits? As the author writes, once Big Pharma managed to convince young Japanese that there was such a thing as “depression”—a notion not strictly alien, but bound up in other terms and with other remedies—then it was able to extract millions of new dollars from an untapped market. Throughout, Watters urges that we be concerned about the losses of native categories of mental health and illness in just the way that we lament the loss of other kinds of diversity.

Mental-health professionals should pay attention, and shrewd investors in pharmaceuticals may take interest in Watters’s guess as to what disorder is likely to be big in the near future.