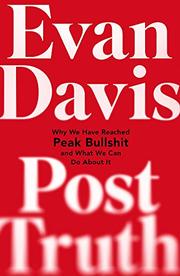 Why We Have Reached Peak Bullshit and What We Can Do About It
by Evan Davis
BUY NOW FROM
AMAZON
BARNES & NOBLE
LOCAL BOOKSELLER
GET WEEKLY BOOK RECOMMENDATIONS:

A British news anchor and economist turns a gimlet eye on the “post-truth era.”

Lying, writes BBC2 Newsnight main presenter Davis, is a species of bullshit. But so, too, is “trying to deceive without lying” as well as “the myriad forms of padding that are designed to impress, obfuscate or attract attention.” All these are myriad indeed, and ubiquitous; whether fake news or bullshit that has been accepted as truth, they fill our heads every day. Usefully, the author observes that facts are like construction beams: not only does it matter what a fact is made of, but it also must be “capable of bearing the weight that is being loaded upon it.” In a time of bullshit coupled with intense, willful intellectual laziness, all kinds of not-up-to-code constructions are being built on bad faith and bad information. Yet, as Davis holds in this dense but accessible argument, there is sometimes a use in that bad information—e.g., as a means of solidarity-building, “a way of strengthening a sense of membership of the tribe.” Thus, one supposes, Fox News and Breitbart. As the author adds later in the discussion, even knowing that a bit of information or argument is bullshit does not necessarily protect us from swallowing it. Throughout, Davis’ approach is unquestionably British, and it will help if readers have a sense of British politics—some conversational fluency in, say, the issues surrounding Brexit—and geography. The latter is useful in understanding why “more trains to Hammersmith” might be a desirable development even if, as Davis uncovers, it means reducing service to other destinations on the Circle Line. One hopes that the author’s assertion that we have, in fact, reached “peak bullshit” is not wishful thinking; after all, there are entire industries devoted to producing the stuff, and their energies do not seem to be flagging.

Useful fodder for the factually inclined and politically disgusted.

ON TRUTH
by Simon Blackburn
Nonfiction

BEING GOOD
by Simon Blackburn
Nonfiction