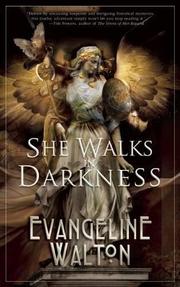 SHE WALKS IN DARKNESS

This posthumous tale from Walton (1907-1996), a pioneering female fantasy author who published her first novel in 1936, finds honeymooning American couple Richard and Barbara Keyes embarking on an ill-fated stay at a remote Italian villa, an imposing structure that conceals both ancient, eerie Etruscan tombs and a family history of madness and murder. Left to fend for herself after her husband is rendered unconscious in an auto accident, Barbara—isolated in a desolate mountain pass without access to a telephone—stumbles upon the gory remains of the villa’s caretaker and finds herself menaced by a mysterious young villager whose connection to the house and its history provides the story’s lurid throughline. The book teems with gothic detail: a mad old prince bent on vendetta, intimations of ancient civilizations, skeletons chained in subterranean tombs, leering sexual threat, lowering shadows and an overwhelmed young heroine besieged by forces she can barely comprehend. It’s mostly good fun; Barbara, while a bit hysterical, is a plucky protagonist, and Walton (The Sword is Forged, 1983, etc.) lards her potboiler with intriguing historical detail—there is much talk of the mysterious, ancient Etruscans and their peculiar notion of justice. But too often, the narrative bogs down in clunky exposition (the prince is an incorrigible monologist) and thin characterization. Still, there is considerable charm in this old-fashioned hair-raiser, and Walton’s focus on history and myth is distinctive.

A slightly awkward but diverting thriller, rich in historical detail, with a peculiar flavor all its own.

THE PRISONER OF HELL GATE
by Dana I. Wolff
Sci-Fi