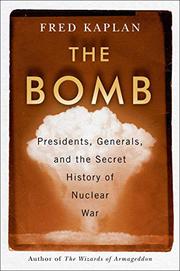 A comprehensive review of American nuclear policy from the Truman administration to the present.

Slate national-security columnist Kaplan (Dark Territory: The Secret History of Cyber War, 2016, etc.) draws on original documents, many only recently declassified, to build a detailed, incisive picture of how U.S. presidents have thought about their most troubling responsibility: pushing “the button” that could end civilization. Equally important players are the top brass in the military who desire more and bigger bombs and the vehicles to deliver them. One theme becomes clear: For the most part, presidents are uncomfortable with nuclear warfare while the military is eager to amass the weapons. Regardless, as soon as a rival power has gained access to nuclear weapons, every administration has had to consider the circumstances under which they might need to be employed. For most of the early history of the bomb, the key strategic decisions were orchestrated by Air Force Gen. Curtis Lemay, whose Strategic Air Command controlled most of the bombers and missiles. But in almost every administration, there were those who dared to oppose him, usually by pointing to the Soviet arsenal and exaggerating the threat it posed. Robert McNamara, the secretary of defense under John F. Kennedy, brought in his “Whiz Kids,” who tried—with limited success—to rein in the Pentagon budget. Richard Nixon, on the other hand, tried to bluff the North Vietnamese into making concessions on the theory that if they thought he was crazy enough to use the weapons, they might back down. Jimmy Carter, firmly convinced of the immorality of nuclear war, also tried—with even less success. Surprisingly, it was Ronald Reagan who took advantage of the Soviet Union’s internal troubles to achieve the first big cut in nuclear weapons. Further gains were made by Bill Clinton and Barack Obama, although the Pentagon and congressional hawks kept both from paring back the arsenal. In the last chapter, the Pulitzer-winning journalist covers Donald Trump’s posturing about the issue.

LINCOLN AND THE ABOLITIONISTS
by Fred Kaplan
Nonfiction

THE INSURGENTS
by Fred Kaplan
Nonfiction