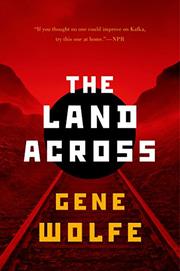 From the accomplished author of Home Fires (2011, etc.), a new fantasy that seamlessly blends mystery, travelogue, authoritarianism and the supernatural.

Grafton, an American travel writer, becomes intrigued by a remote and unnamed Balkan country that chooses to make itself extremely difficult to visit—no flights land there, roads turn back on themselves in the mountains, and so the only way in is by train. But at the border, guards remove him from the train and confiscate his passport and luggage. Instead of prison, though, he’s housed with the surly thug Kleon and his attractive wife, Martya, with the proviso that if Grafton absconds, the police will shoot Kleon. Martya, with whom he’s soon having an affair, tells him of a treasure hidden in an abandoned house. Unfortunately, the house is haunted—confirmed by their discovery of a mummified corpse behind an old mirror. Then, Grafton’s kidnapped by the Legion of the Light and conveyed to the capital, where he agrees to help them broadcast their religious/supernatural philosophy. Soon enough JAKA, the secret police, capture him and throw him in jail, where he finds fellow American Russ Rathaus—apparently some kind of sorcerer who soon manages to escape by unknown means. Grafton realizes that the only way he’ll resolve the situation is by figuring out what’s really going on, so when he’s interrogated by Naala, a senior JAKA agent in pursuit of a thoroughly unpleasant black-magic cult known as the Unholy Way, he agrees to help her. But is Grafton a reliable narrator, and is Rathaus as innocent as he seems? Wolfe, in masterful mood, builds his characters, explores the puzzles, links the elements together and contrives to render the backdrop both intriguingly attractive and creepily sinister.

THE BEST OF GENE WOLFE
by Gene Wolfe
Sci-Fi

THE WIZARD
by Gene Wolfe
Sci-Fi

RETURN TO THE WHORL
by Gene Wolfe