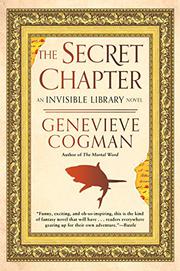 In a world of dragons, Fae, and time-traveling Librarians, an unlikely team, thrown together by circumstance, must steal a massive painting from a European museum.

Librarian Irene Winters and the dragon prince called Kai have only just had a chance to celebrate the good fortune of a recent treaty between the dragons and the Fae when a new, critical job presents itself in this new installment of Cogman's (The Mortal Word, 2018, etc.) Invisible Library series. Chaos threatens the world in which Irene grew up, and it can only be stopped by the recovery of a text containing a one-of-a-kind story. To get it, Irene and Kai will have to bargain with Mr. Nemo, a secretive Fae who lives in a world outside the treaty and who has a penchant for feeding his enemies to sharks. Like all Fae, Mr. Nemo expects something in return—Théodore Géricault’s The Raft of the Medusa, to be precise—and he wants Irene and Kai to work with five other specialists to secure it. Traveling from Mr. Nemo’s tropical 1980s hideaway to a version of contemporary Europe, the crack teammates find themselves endangered by the presence of an anti-supernatural police force, and the angst present in Irene and Kai’s relationship intensifies as each comes to discover how little they know about the other’s motivations and allegiances. Cogman (The Mortal Word, 2018, etc.) slathers on the intrigue, layering and twisting together the plots of dragons, Fae, and Librarians alike to arrive at a conclusion that some may deem too cleanly rendered. Although one or two Fae members of Mr. Nemo’s seven-person heist team prove forgettable, the near-relentless mischief and mayhem make for an indulgent read.

A series installment that works well as a stand-alone, with final twists that will leave readers wanting more.

THE LIBRARY OF THE UNWRITTEN
by A.J. Hackwith
Fiction

A DISCOVERY OF WITCHES
by Deborah Harkness
Sci-Fi