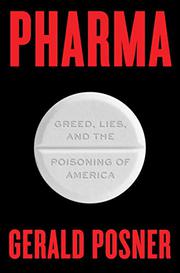 Of nightmare germs, sleazy dealings, and the big money that fuels the (legal) drug trade.

Investigative journalist Posner writes that big pharma “resides at the intersection of public health and free enterprise,” sometimes capable of lifesaving acts but often an agent of unbridled greed. The industry emerged in the 19th century with the need to care for wounded soldiers and new strains of epidemic diseases such as yellow fever and cholera. In the early days, firms had a lock on certain broadly applied medicaments—morphine, in the case of Pfizer. A century later, when physician Arthur Sackler came onboard, Pfizer had just a handful of salespeople; Sackler forged an army of thousands of them, fanning out to sell drugs he had developed, such as Valium, to a waiting audience. In time, Sackler came under federal scrutiny, a bête noire of crusading Sen. Estes Kefauver, who “was bothered by an industry where only a few firms dominated sales and had unfettered discretion to set prices.” Moving on to the family-owned Purdue Pharma, Sackler and kin refined techniques of secrecy and underreporting. As Posner notes, it was a firing offense for a salesperson to make notes on visits to doctors in writing, and what went on behind closed doors were all sorts of spoken inducements and rewards for prescribing and overprescribing the firm’s products, including OxyContin. Even in Kefauver’s time, the U.S. pharmaceutical industry was making many multiples more profit than other sectors of the economy, charging far more to American consumers and insurers than to those in other parts of the world. This was true of the AIDS-battling AZT, “the highest priced drug on the planet.” This remains true today, even as Purdue, heavily fined for its role in an epidemic of opioid-overdose deaths, tiptoes into bankruptcy, one ploy in the “complex corporate chess game in which Arthur Sackler excelled.”

A shocking, rousing condemnation of an industry clearly in need of better policing.