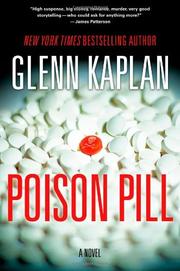 In the high-stakes sport where people are game pieces and dollars are on the scoreboard, the players are Percival & Baxter, a major pharmaceutical manufacturer; Anglia Partners, a capital investment firm; and Viktor Volkov, a billionaire Russian oligarch. P&B’s rumored to have developed chemistry that could result in the "first female orgasm pill." Residing in London, the wily Volkov, attempting to shift crime-earned billions into legitimate enterprises, intends to drive P&B’s stock to the bottom and buy controlling interest. Enter Anglia, Josh Katz’s troubled investment firm, in need of a cash infusion. Anglia will front for Volkov, a decision complicated by the fact that Josh’s former wife, Emma Conway, is a high-ranking P&B executive. Mentioning all the right addresses, the right schools and the right brand names, Kaplan moves the setting from London to Philadelphia to Connecticut. Volkov sparks P&B’s collapse by having his agents add cyanide to a batch of Acordinol. The first poisoned pill kills P&B’s CEO and then six innocents. Amid panic, corporate leadership falls to Conway. There’s a minor plot hole, but Kaplan does a decent job of ratcheting tension as the leveraged buyout attempt unfolds, exacerbated by personal tension between Conway and Katz. In a parallel thread, Peter Katz, the pair’s teenage son, and Tanya Volkov, the Russian’s just-out-of-college daughter, meet at Kroesus Kids, a luxury camp for billionaire progeny. The youngsters stumble over their own emotional immaturities and then become part of the problem—and part of the solution. Other minor characters, including Conway’s always-wise-counsel mother, Katz’s cut-any-corner PR guy and Volkov’s amoral henchmen, run to the formulaic.

A good-enough drama of the clash between greed and good guys, albeit saddled with a too-neat conclusion.

ALL FOR MONEY
by Glenn Kaplan

EVERYTHING TO LOSE
by Andrew Gross
Nonfiction

DEN OF THIEVES
by James B. Stewart
Fiction

MIGHTIER THAN THE SWORD
by Jeffrey Archer
Indie