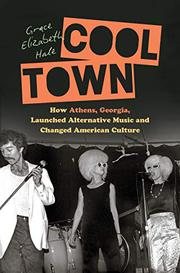 A carefully constructed history of how Athens, Georgia, became a cultural hot spot.

Everyone’s heard of R.E.M. These days, fewer are familiar with the B-52’s, and almost no one outside the musical cognoscenti knows the Flat Duo Jets and Pylon. All of these bands, writes Hale (American Studies and History/Univ. of Virginia; A Nation of Outsiders: How the White Middle Class Fell in Love With Rebellion in Postwar America, 2011, etc.), were ingredients in the cultural stew in which she grew up. The author combines her insider’s perspective with her academic skills, creating a book that is scholarly without being arid, popular without being condescending—a pleasing mix, as were the sounds produced by Athens bands from the late 1970s through the early 1990s. During that period, Hale writes, “the Athens scene produced amazingly good music…but the scene also transformed the punk idea that anyone could start a band into the even more radical idea that people in unlikely places could make a new culture and imagine new ways of thinking about the meaning of the good life and the ties that bind humans to each other.” It wasn’t just bands: The hipster/hippie/bohemian set neatly interacted (and often shared memberships) with the gay community, drawing like-minded people in from the surrounding countryside and outstripping larger cities such as Charleston and Atlanta in building a community in which writers, painters, musicians, poets, and scholars wandered between media and genres. Not much has changed, writes the author. In Athens today, “the currency remains DIY culture,” with primacy placed on the homemade rather than the appropriated. Many of Hale’s cases are happy ones, but some end tragically—e.g., Vic Chesnutt, for whom the Athens scene “worked pretty well…until it didn’t,” whereupon, ever on the verge of fame, he killed himself. He would doubtless be pleased to be included among the many “outcasts or weirdos” whom Hale respectfully recounts.

A welcome history of an overlooked milieu, one that provides ample inspiration for art makers today.