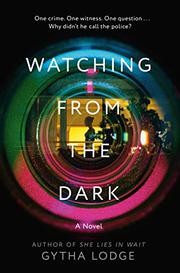 WATCHING FROM THE DARK

A man reports the murder of his girlfriend, which happened while he was Skyping with her, in Lodge’s (She Lies in Wait, 2019) second English mystery.

At first the police don't take the report seriously because the caller won't give his name, but on a hunch, DCI Jonah Sheens and his team look into it, and they do indeed find the body of Zoe Swardadine. From the start, there is a plethora of shady characters doing shady things to hide their shady secrets. Foremost among them is Aidan, the (married) boyfriend who called in the crime. The drama of his on-again, off-again relationship with Zoe may have been responsible for her complete transformation over the last few months of her life. And then there’s Victor, Zoe’s irascible co-worker, who may have nursed his own fantasies of a relationship with her, and Maeve and Angeline, Zoe’s best friends, who relied on her to pick them up every time they fell. As a picture of Zoe’s last few months begins to coalesce, Jonah and his team sense a malevolent presence at the heart of the case—someone who hated Zoe enough to murder her at her most vulnerable time. They rush to put the pieces together before one of their own is unwittingly put in danger. Lodge alternates between chapters following the investigation into Zoe’s death and chapters that recount the final 20 months of her life, allowing the reader to understand Zoe as a fully rounded and complicated character, not just a victim. This choice, trendy in thrillers but almost always effective when the characters are strong, consistently reminds us to look beyond simplistic binaries of victim and perpetrator, innocent and guilty, and recognize that all humans make problematic choices, sometimes for good reasons and sometimes for bad.

Lodge's choices celebrate the complexity of humanity and elevate this police procedural.