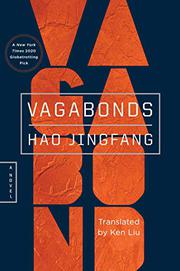 Social science fiction: a debut novel from the Chinese author who won the 2016 Hugo Award for Best Novelette with Folding Beijing.

The year is 2201. Just over a hundred years ago, the Martian colonies fought and won a war of independence against Earth, and since then, the two planets have diverged sociologically. In Hao's incisive and all-too-plausible extrapolation, Earth embodies the triumph of Western laissez faire capitalism driven by the internet's savagely competitive social media. Mars, technologically much more advanced and apparently utopian—and here the author treads more cautiously—persuasively represents what benevolent Chinese communo-capitalism might possibly evolve into. Consequently, mutual suspicion and resentment bordering on outright hostility dominate the Earth-Mars relationship. To counter this trend, five years ago a group of Martian students were sent to Earth. Now they have returned to Mars accompanied by a cultural delegation of prominent Terrans. One student, Luoying, enjoyed her time on Earth without fully grasping the ruthlessly materialistic nature of Terran society. To her now, Mars appears dull, its society rigidly stratified. As an average student, she suspects that she wasn't really qualified to make the trip. Could her grandfather Hans Sloan, currently the consul of Mars, have pulled strings to include her? How did her parents really die, and how was her grandfather involved? Hao's intricate political commentary addresses Luoying's emotional progress through dissatisfaction and disillusionment toward enlightenment. Sophisticated all this might be, but it remains commentary rather than criticism; one could wish for the author to occasionally pick up a scalpel and dissect. Often immersive, the story accretes grain by grain, like sedimentary rock formation, rather than as an orthodox narrative, and it sometimes seems nearly as slow. On a more intimate level, readers hear the thoughts inside people's heads and feel their emotions but don't come away with Martian dust under their fingernails.

A thoughtful debut with ample scope for reader engagement.

THE HIDDEN GIRL AND OTHER STORIES
by Ken Liu
Sci-Fi

THE REDEMPTION OF TIME
by Baoshu
Sci-Fi

THE GRACE OF KINGS
by Ken Liu
Newsletter sign-up