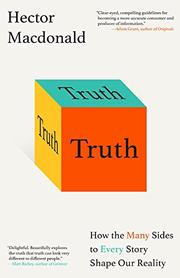 How the Many Sides to Every Story Shape Our Reality
by Hector Macdonald
BUY NOW FROM
AMAZON
BARNES & NOBLE
LOCAL BOOKSELLER
GET WEEKLY BOOK RECOMMENDATIONS:

How can I mislead you? Let me count the ways.

Macdonald (The Hummingbird Saint, 2016, etc.), described as an “expert in business storytelling,” opens with an instructive look at one of the avenues by which dubious information becomes enshrined as fact—namely, good intentions. His case study is the lowly Andean grain called quinoa, discovered a couple of decades ago by health-conscious eaters and celebrated as a superfood. So popular was it that quinoa prices tripled in South America, followed by “rumors that local people could no longer afford to eat their traditional food because of the insatiable demand from North America and Europe.” Yes, but the unstated part of the equation was that this demand brought enough money into the economy that Bolivian farmers could eat something more expensive. Chalk up a “partial truth,” then, which may or may not be sufficient to explain why something is the way it is, even when ventured for “the noblest of reasons.” Usefully, Macdonald examines not only partial truths—incomplete for reasons ranging from good aims to obfuscation—but also other categories of “competing truths,” among them subjective and unknown truths, as well as truths that are not strictly factually provable but are so because we act on them as if they were. In the end, no matter what category our various mendacities and half-baked notions fall into, one is impressed by how much activity centers on them. In a particularly pointed example, the author examines the use of the word “natural” when applied to a fizzy drink in which cane sugar took the place of the former corn syrup and the regulatory quandaries thereby exposed, eventually causing the company to drop the term. “You know your marketers have lost touch with reality,” Macdonald writes, “when they need ‘detailed regulatory guidance’ on how to use a word like natural.”

Nothing earthshakingly new here, but an interesting and entertaining excursus that, in this post-truth era, may prove of use in helping unpack a specious claim or two.