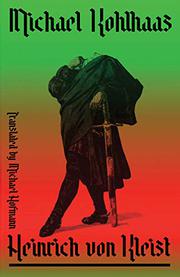 Foundational novella of the German romantic era, celebrating a folk hero of the 1530s.

First published in 1810, the year before von Kleist committed suicide at 34, this short, elegant novel is well known to students of German literature. It’s easy to see why Franz Kafka should have esteemed it so much, drawing on it for books like The Castle and The Trial: The hero of the piece is a law-abiding man who confronts an obdurate bureaucracy and loses—though not without a fight, for, as von Kleist writes, “his sense of justice led him to robbery and murder.” The eponymous horse trader travels a well-worn path to market only to find a new tollbooth blocking his way. It seems that Wenzel von Tronka, heir to the newly deceased lord of the territory, is exercising his royal privilege to issue visas to cross it for a fee, and although Kohlhaas protests that “he had passed this frontier seventeen times in the course of his life without any such document,” he is forced to leave two horses from his string as security. Arriving in Dresden, the regional capital, Kohlhaas learns both that this demand for collateral was imposed arbitrarily and that his captive horses have been ill treated, though the lawsuit he files is eventually dismissed as a “baseless fuss” thanks to von Tronka’s influence. That’s reason enough for him to become a fierce avenger who sets out in fury to reclaim what’s his—and, in the orderly realm of the Electorate of Saxony, such outlaw acts, no matter how well justified, are enough to earn a person a death penalty. Von Kleist complicates the story, which he relates as a matter-of-fact chronicle, with a few neat twists toward the end, quietly satirizing both the legal system and the imperial order of his day while suggesting that the quest for justice is more likely to backfire on the petitioner than be rewarded with anything other than “near-universal mourning.”

A masterwork that, 220 years on, holds up well thanks to this fluent translation.

THE SWEET INDIFFERENCE OF THE WORLD
by Peter Stamm
Fiction

TO THE BACK OF BEYOND
by Peter Stamm
Fiction

INVESTIGATIONS OF A DOG
by Franz Kafka
Fiction