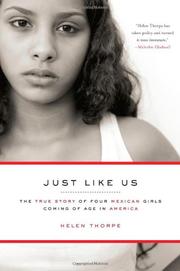 Taking a page from Adrian LeBlanc’s 2003 book, journalist Thorpe spent several years with her subjects—four Mexican girls, two legal, two undocumented. Elissa and Clara have endured many of the problems of immigrant life, including poverty, absent fathers, mounting familial responsibilities and intense pressure to succeed. But for Marisela and Yadira, who crossed the border with coyotes as babies, the hurdles are much higher. Both exceptional high-school students, the two illegal immigrants were ineligible for financial aid or in-state tuition at any public universities. Though they managed to find private benefactors and enroll at the University of Denver, even with a college degree their options are limited—without Social Security cards, they won’t be able to work legally. Alongside the lack of medical insurance, the inability to travel and the constant fear of deportation, the future, even for these extremely talented and motivated students, looks grim. As Thorpe followed the girls, Denver became a hotbed of immigration issues when an illegal alien was arrested for shooting a police officer. Further complicating matters was the fact that Thorpe is married to Denver mayor John Hickenlooper. “Fortune handed me a messy braid of narratives, spliced together by bizarre connections,” she writes. “In the end, though, this is what immigration is like: inherently messy. The issue bleeds. And we are all implicated.” The author’s position in the Denver political scene gives her a unique perspective, but her real strength is the painstaking way in which she gets to know the women and their families.

Through the lives of four fascinating young women, Thorpe creates not only a moving examination of a complicated American issue, but a well-told, inspirational story as well.

THE NEWCOMERS
by Helen Thorpe
Nonfiction

The Kidding Pen
by Hillrey A Dufner
Indie