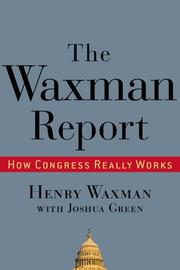 How does Congress work? With utmost difficulty, reveals longtime House member Waxman—but those who hold it in low regard, he adds, “lack a full appreciation for what Congress really does.”

The author arrived from California to the U.S. Congress as a member of the “Class of 1974,” the first post-Watergate group of representatives. It was a time of great reform, as former student activists and civil libertarians pressed agendas to move civil rights, women’s rights, environmental protection and other programs forward in the face of slowly dwindling resistance from the old guard. (One, writes Waxman, was a Virginia representative who “had managed to block civil rights legislation for years by refusing to allow bills to go to the floor for a vote.”) Having swept the old-timers aside, the youthful vanguard—now the liberal establishment—specialized, with Waxman steadily developing a comprehensive program of health-care reform and championing causes such as AIDS research and treatment (against vigorous Republican opposition) and, recently, tobacco regulation (ditto). He has been helped over these four decades by holding a safe seat—meaning, he says, “I didn’t need to raise much money for my own reelection,” but instead was able to contribute to the election of like-minded allies—as well as a useful ability to forge coalitions. Reading between the lines, it seems that Waxman has also been well served by simply paying attention, reacting to events as they unfold. Examples include regulations on the chemical industry following the 1984 Bhopal disaster to the inexorably turning tide against smoking—and, pointedly, a singularly evil tobacco industry (“To ensure increased and longer-term growth for Camel Filter…the brand must increase its share penetration among the 14–24 age group”).

A welcome look at the internal workings of the legislative branch—essential for political junkies.