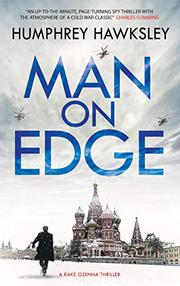 Now that he’s repelled the Russians from his Alaskan hometown (Man on Ice, 2019), Maj. Rake Ozenna of the Alaska National Guard finds himself battling them in the Eastern Hemisphere.

Although Rake’s foes fly the same flag as in his debut, they’re considerably more fractured this time around. Nuclear submarine expert Artyom Semenov, Rake's ex-fiancee Dr. Carrie Walker’s uncle, for years a loyal Russian, is suddenly acting as if he wants to defect immediately and bring with him a thumb drive filled with unspecified secrets. Col. Ruslan Yumatov, a strategically placed officer who’s already betrayed one would-be defector, is determined to stop this one as well. Sergey Grizlov, Russia’s charismatic new foreign minister, is clearly angling to succeed President Viktor Lagutov sooner than his boss expects. When Carrie heads to the old country to give her uncle whatever help she can and then finds out it’s not nearly enough, she immediately has to go on the run herself, unable to decide which of the sharply conflicting parties who offer to protect her from the others she can actually trust. Despite having broken off their engagement, she sends an SOS to Rake, whose friendship with Detective Mikki Wekstatt, an Alaska State Trooper seconded to the Norwegian Police Service, brings him into uncomfortably close contact with a routine interview that turns into a blood bath. Even though she makes all the right decisions, Carrie gets kidnapped anyway; the body count rises alarmingly; and the villains plot a game-changing double assassination. Can Rake and his allies possibly cut through the fog of triple-crosses and alliances of convenience to rescue Carrie and make the world safe, if not for democracy, at least for Rake’s next adventure?

The pace is furious, the casualty list breathtaking, and the plotters exactly whom you suspected.