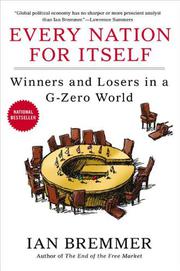 EVERY NATION FOR ITSELF

"[T]he world needs leadership,” writes Bremmer (The End of the Free Market: Who Wins the War Between States and Corporations?, 2010, etc.). “We're not going to get it."

Not for a while, anyway. Welcome to the G-Zero (in contrast to, say, the G-20), a period of "tumultuous transition" in which "many countries are now strong enough to prevent the international community from taking action, but none has the political and economic muscle to remake the status quo.” The author describes in cogent detail the various reasons why no one—not the United States, not China, not the European Union or institutions like the World Bank—is presently in a position to provide or impose global leadership. As a result we have entered an unstable time when nation-states will pursue their own interests relatively unrestrained by other nations or alliances. Economic strength, not military strength, will determine the new international balance of power. Some nations—e.g., "pivot states" like Brazil—will thrive by building "profitable relationships with multiple countries without becoming overly reliant on any one of them." States in the shadow of a powerful neighbor, like Mexico, or friendless rogue states will likely wither. The ongoing effects of China's economic expansion and America's response to it will be key factors in determining the world order that will emerge from the G-Zero. Bremmer believes the United States can still regain a position of global dominance, but only if we get our public debt under control. His argument is weakened when he drifts into areas in which there have never been genuinely effective efforts at international cooperation (e.g., climate change, distribution of food and water), but even these topics demonstrate the extent of the developing international anarchy.

A clear-eyed, if not very provocative, vision of disorderly times ahead.

US VS. THEM
by Ian Bremmer
Nonfiction

THE J CURVE
by Ian Bremmer

THE AGE OF THE UNTHINKABLE
by Joshua Cooper Ramo
Nonfiction

THE NEXT 100 YEARS
by George Friedman
Indie

A WORLD IN DISARRAY
by Richard Haass
Nonfiction