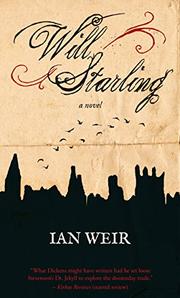 Framing the mystery within Weir’s (Daniel O’Thunder, 2011) novel is an extraordinary rendition of life in Regency-era London.

The eponymous narrator awaits the noose at Newgate Prison. Will is innocent, but he's tainted by his association with the resurrection trade, provenance of those willing to haul a fresh corpse to the porter at Guy’s Hospital for dissection. It’s 1816. Many surgeons returned from the Napoleonic War expert with scalpel and bone saw. What had been a barbarous, bloody business began integrating into medicine as treatment, leading to a demand for cadavers to train prospective surgeons. Grave-robbing resurrection men supplied hospitals and surgeons like Dionysus Atherton, "brightest rising star in the chirurgical firmament." Others, like Will’s employer, Alec Comrie, "a growling Scotsman with a bonesaw," avoid the ghouls. Weir’s worth reading simply for his characters: grave-robber Jemmy Cheese, with "too much imagination for it"; his pawn-shop–owning brother, Edward Cheshire, a "scholard"; and prostitute Meg Nancarrow, "beautiful...in the way a small fierce thing can have beauty." A man’s murdered over a resurrection secret. With Meg hanged for it, Atherton becomes "shipwrecked into obsession" over the idea the "dead may be summoned back." Weir has written a mystery worthy of every word while adding historical tidbits about foundling homes housing "[b]its of flotsam no one cares about"; the Bow Street Runners; slums like St. Giles, that "vast appalling rookery"; and Keats as a medical student. Characters rollick and scheme through a plot as snaky as a London alley in a setting as powerful as a chamber pot tossed from a garret window. No happy tale this, but Starling’s adventures among the Spavined Clerk, the Wreck of Tom Sheldrake, Boggle-Eyed Bob and Alf the Ale-Draper are a delight all the same.

What Dickens might have written had he set loose Stevenson’s Dr. Jekyll to explore the doomsday trade.

THE CONVICTIONS OF JOHN DELAHUNT
by Andrew Hughes
Fiction

THE SIGNATURE OF ALL THINGS
by Elizabeth Gilbert
Newsletter sign-up